Kiran Young Wimberly is a Presbyterian minister who has served congregations in Northern Ireland and the United States.

Trained in spiritual direction and a leader of pilgrimages in Ireland (celticfootstep.com), she has also studied the use of psalms in early Irish Christianity and the spirituality of psalm singing for contemporary Christians. 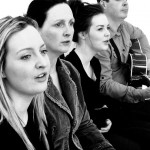 The McGraths live in Dungannon and own McGrath’s Pub.
They participate in local arts through drama and music.

Ellen and Chloe are the eldest of Declan and Kelly’s five children.

Dónal O’Connor is an Irish composer, producer and television presenter from Oriel, Ireland. Dónal is a renowned fiddler and is a member of Belfast-based group At First Light.